by Amos Dowber and I.J. Makan

We recently had the opportunity to interview Craig A. Carter (PhD, St. Michael’s College), professor of theology at Tyndale University College and Seminary in Toronto, Ontario, for his upcoming book, “Interpreting Scripture with the Great Tradition: Recovering the Genius of Premodern Exegesis” (Grand Rapids, Michigan: Baker Academic, 2018) This book is a timely call to evangelical Christians to recover pro-Nicene theology which is part of their evangelical faith. Pro-Nicene theology, as Carter explains, is the framework in which the Nicene Creed of AD 325 was formulated. In this interview we talk about Christian Platonism, methodological naturalism, and other issues at the heart of debates in Biblical hermeneutics today.

AD & IJ: What is pro-Nicene theology?

CARTER: Pro-Nicene theology can refer to a theological work, theologian or school of thought that is supportive of using the word homoousios in the Nicene Creed of 325 and the Niceno-Constantinapolitan Creed of 381 AD.  The great theological controversy that raged throughout the 4th century (325-381) was the issue of whether this word needs to be used to describe the relationship of the Father and Son.  Are they really “one in being (or essence or substance)”?  Or are their beings similar?  Or are their beings different from each other? 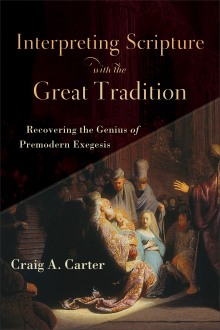 Those who opposed Nicaea did so from different perspectives. (1) One group believed that the being of the Father and Son is the same, but objected to using a non-biblical word (homoousios) to describe that relationship.  They wanted only biblical language to be used. (2) Another group believed that the being of the Father and that of the Son are very similar but not identical and they feared modalism – the idea that there is really no distinction of persons.  Are the Father and Son just names for the one God?  Is God really 3 persons or just one person who puts on different disguises? (3) A third group eventually revealed themselves to be heteroousians – those who believed that only the Father is of uncreated being and that Son’s being is fundamentally different because he is the first and greatest creation of God.  This last position is classic Arianism. Some of the Homoians (a major group in the middle of the 4th century) eventually sided with positions 1and 2, while others openly embraced position 3. Those whose main concerns were 1 and 2 eventually joined with the pro-Nicene to formulate the orthodox majority, which was expressed in the creed of 381.

The problem in the 4th century was figuring out how to separate the true Arians from those who believed the Nicene faith but just wanted to use biblical language only or were afraid of modalism. Eventually the church fathers decided the homoousios, (properly qualified and defined)  was necessary in that context in order to express biblical truth.

Most of the ecclesiastical battles during the 4th century revolved around issues related to being either for or against Nicaea.  Hence a number of different theological position (both in the Greek East and the Latin West) became known as “pro-Nicene”.  These theologies did not agree on every point of doctrine and originated in different regions with varying traditions etc. But it is useful, from an historical perspective to classify them as “pro-Nicene,” anti-Nicene,” and even to note that a few were indifferent to Nicene formulations.  But neutrality was not possible in the long run.

An important lesson to take away is that there is more than one way to be orthodox, yet orthodoxy is not infinitely elastic.

However, we can identify several areas of historical studies that offer help to theological interpreters. Let me give three quick examples. One is modern studies in the nature of Hebrew poetry.  I am working on Isaiah a lot these days and 62 of 66 chapters are poetry.  So the modern translations like the English Standard Version that set out the poems in lines and stanzas are enormously helpful in interpreting the text.  Two, another sub-discipline that is extremely helpful is textual criticism.  The effects of the discovery of the Dead Sea Scrolls has been very positive overall in several ways, but with regard to textual matters one of the effects has been to vindicate the Septuagint in certain places.  All the information we have on the history of the text today helps in interpretation. Three, form critical studies can be helpful as long as the emphasis is placed on the analysis of the text, rather than being distracted by the hypothetical, re-constructed history behind the text.  Gunkel’s and Mowinckel’s excesses need not be imitated by serious students of the form of the text itself.

The major problem is the truncated, narrow definition of history employed by the HCM.  This prevents critics from understanding the Bible at many points because what the text is saying just does not fit into the narrow and superficial metaphysics of the critics. My point is that the main problem is not that the HCM is not compatible with traditional readings, but rather, that the HCM is ill-equipped to deal with the text itself, since it presents itself as sacred scripture.

AD & IJ: What’s the importance of theological metaphysics and is it needed?

CARTER: I see pro-Nicene theology as a 3-legged stool with the 3 legs being: 1) exegesis of the text, which leads to 2) dogmas formulated by contemplation of the revelation uncovered in exegesis and 3) metaphysical implications of those dogmas, which form a hospitable context for further exegesis of the text. So, for example, exegesis of Gen. 1 leads to a doctrine of creation, which has as a metaphysical implication creation ex nihilio. This metaphysical doctrine becomes a foundational building block of Christian Platonism, which is the context in which exegesis can be done without distorting the meaning of the text by the imposition of a foreign philosophy like naturalism on it.  Exegesis, dogma and metaphysics form a continuous feedback loop or spiral out of which arises wisdom over time.  Without a true metaphysics, biblical interpretation is crippled.

CARTER:  Is not only possible, it is the only possible metaphysics for maintaining orthodox, Nicene doctrine. The alternative to Christian Platonism in both the ancient world and modernity is naturalism.  The idea that Christian doctrine can be expressed within any metaphysical system whatsoever without introducing contradictions and heresies into doctrine, is simply preposterous. Why would anybody believe it?  If my theory that modernity is the systematic, point-by-point rejection of Christian Platonism and, if the culture of death is slowly killing the post-Christian West, should not the burning question be: “Is the rejection of Christian Platonism possible?” (I suspect this brief answer generates more questions.  But I spend a whole chapter in the book explaining what Christian Platonism is and why it is biblical.)

AD & IJ: What relevance does tradition have to the meaning of a biblical text?

AD & IJ: Can Christians read the Old Testament (OT) historically and Christologically? And what’s the relation between the two?

CARTER: The incarnation is rooted in history and the history of prophecy of the Messiah is found in canonical Scripture.  We must read the OT Christologically or we misunderstand its meaning. The Christology is inherent in the text itself, not read into it from a later perspective or by the interpreter.  A healthy concept of Divine authorial intent and a high view of inspiration is necessary to “get” the OT.  So the Great Tradition of Christian orthodoxy claims that the Christological meaning is the true historical meaning–i. e. the meaning that is intended by the text.

The problem is that there are two definitions of the word “history” in use today and seldom are they clearly distinguished.  The traditional meaning of history is “the interpretation of past events based on written records” and the Enlightenment definition is “the interpretation of past events based on written records assuming that philosophical naturalism is true.”  The latter, narrowed meaning is useless in biblical interpretation because it seeks to imprison the text in a metaphysical straightjacket that prevents the text from saying all that it has to say.  Philosophical naturalism silences the text because it disallows the text saying some things the text wants to say but the interpreter refuses to hear.
The question is “whose worldview is authoritative”?  Is the worldview of the Bible itself the proper context for interpreting biblical texts or is the neo-pagan, Enlightenment, naturalist worldview the proper context?  Which worldview provides a context that best allows the text to say all that it has to say? I fear that modern historical critics are doing something very similar to what Irenaeus accused the gnostics of his day of doing.  He accused them of bringing a foreign worldview to the Bible and reading it into the Bible in such a way as to make the texts of the Bible appear to say things that fit into their worldview.  He said that this disfigures the image of Christ that the text paints.  Modern critics read philosophical naturalism into the text, strain out what does not fit into their narrow parameters and then claim that the Bible supports their neo-pagan metaphysics and ideological agendas.  They are not just inadeaqate; they are wrong.  And they are not just wrong; they are corrosive.  And they are not just corrosive of biblical meaning; they eventually will destroy the biblical message altogether if allowed to dominate biblical interpretation.  When Paul sounds like a postmodern Marxist, you know the whole enterprise has gone completely off the rails and tinkering a bit around the edges of the enterprise will not fix things up.

AD & IJ: Why is the recovery of premodern exegesis important for Christians today?

CARTER: It is crucial because it represents a way out of the dead end of the HCM.  It is our heritage – our patrimony – which has been stolen from us.  The church fathers, medieval schoolmen and protestant reformers wrote majestic works of great spiritual insight and power.  We need to benefit from these works and let them edify and encourage us.  In many ways, contemporary Western culture is becoming more and more like the late Roman empire.  The fathers lived in such a period and they did not accommodate to it; they converted Roman culture.  We need their help as we confront a culture of death, a barren philosophy and a decadent, dying culture.  The way they read the Bible is key to their engagement with their culture and the way the Bible has been read during the modern period is the key to the decline of our culture as a whole.  So nothing could be more important than to learn how to read the Bible in the way it is meant to be read by the one who is the its author and chief subject: Jesus Christ.

Amos Dowber is completing his MA in Theological Studies at Regent College, Vancouver, and received a BA in Biblical Studies & Theology from Tyndale University College. He is interested in theology, philosophy, and history. He enjoys a cigar paired with single malt while reading. @AmosDowber

I.J. Makan is the founder and editor of Kazingram Dialogue. He’s completing his MA in Philosophy at Saint Mary’s University and received a BA in Philosophy and Biblical Studies & Theology from Tyndale University College. His philosophical interests are in philosophy of religion and ethics. In his free time he practices Brazilian Jiu Jitsu. @ijmakan